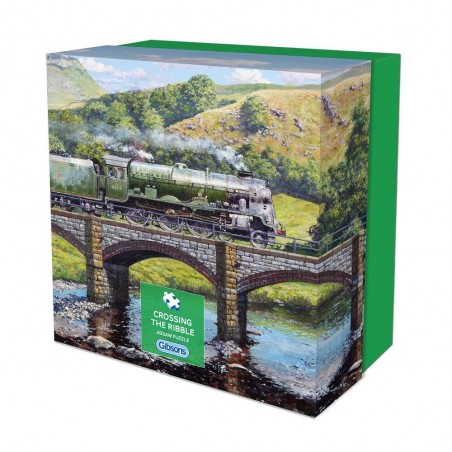 At Helworth Bridge in the early 1960s, the Thames-Clyde Express speeds through Upper Ribblesdale en route from Settle to Carlisle. She’s hauled by the 4-6-0 Royal Scot class 46113 ‘Cameronian’.

ABOUT THE ARTIST: Stephen Warnes

Stephen Warnes was born and brought up in north east Lancashire. He completed his very first painting at the age of six and hasn’t stopped since! His passion for railways developed between the ages of eight and fifteen and coincided with the end of the great age of steam.

Over the years, Stephen Warnes has gained a reputation for producing accessible modern paintings. Often intricate drawings that focus on fascinating social histories, he creates some of Britain's finest railway art.

As well as a high level of technical skill, Stephen has an Honours degree in the Theory and History of Art and in recent years has held public exhibitions to showcase his masterpieces.

Stephen was elected a full member of the Guild of Railway artists in 1994 and he has exhibited nationally at the GRA’s ‘Railart’ exhibitions.

Made from thick, durable board that is 100% recycled

Presented in a smart compact box that comes with a folded print-out of the puzzle image.