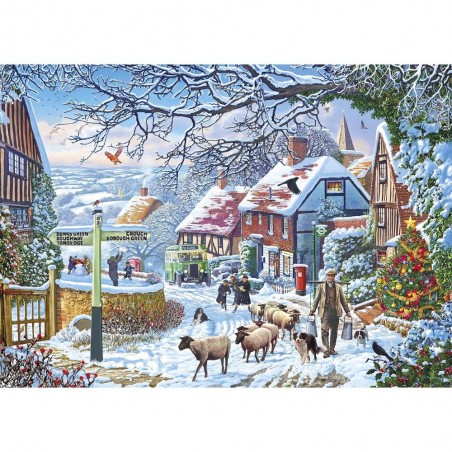 The seasons have changed for Ted and his loyal pups, but that doesn’t stop them from making their morning stroll through the village. The snow-covered street is full of the joys of the season as Ted passes through and the children are busy having a snowball fight before climbing aboard the bus to school.

ABOUT THE ARTIST: Steve Crisp

Artist, Steve Crisp was educated around the late seventies at St. Martins School of Art, London and at a time when many young students were graduating from college with new styles and ideas. He is a fine example of someone who has gone on from that period to become a well-established, internationally known, award winning illustrator.

He has a large and diverse catalogue of work especially from the eighties and nineties, many of which have become collector’s pieces. Steve has managed to adapt well to the changing needs of illustration especially with the introduction of digital techniques ten years or so ago